With a name like Unicycle.com, you might think we limited ourselves and thereby our customers to unicycles and unicycling parts and equipment. That just isn’t the case - unicycles have for a long time been lumped together with other odd cycling machines like minibikes, circus bikes and penny farthings. While mastery of the one wheeler is anything but a cheap trick, for better or for worse, the popular image of unicycles is wedded to stunt riding and performance, and sometimes, if you can’t beat ‘em, join ‘em.

And so, here at Unicycle.com, we are not only the authority on all things unicycling, but we’re also a great spot for information about trick bikes and other oddities. One of the highlights from our collection is our Hoppley Circus Bike (20 inch model) which, while perfect for tricks, is not all about stunts.

What is a Circus BIke: How They’re Different from Other Bikes

Your first look at a circus bike, like our Hoppley 20 inch Circus Bike, probably isn’t cause for a double-take, at least not in the ways that a penny farthing or a giraffe unicycle could cause one. It sort of looks anything like a regular bicycle, until you start to peel back the layers of its construction.

Our Hoppley Circus Bike (20inch) is in some ways similar to a chain-driven bike, but then again it is very different. Speaking of which, this is not a chain-driven bicycle at all. Other bicycles have chain drives interconnected with the crank arms so that the leverage of pedaling power can be multiplied, allowing cyclists to achieve higher speeds more efficiently. Circus bikes like this one have crank arms attached directly to the hub of the rear wheel.

The effect is twofold. One is that it is more difficult to achieve high speeds with a circus bike, and that top speeds are limited by the diameter and thus the circumference of the wheel to which the crank arms are attached.

Something else to note about the design of this bike is that both wheels rotate completely freely of each other, making trick riding much easier. In addition to this feature, the posts over both the front and rear wheel allow the seat in addition to the handlebars to rotate independently, enabling a number of stunts and tricks.

This circus bike also has pegs on the front wheel, which are sized appropriately for the accommodation of another rider. This, however, is not a unique feature and may be present on some bicycles. They can certainly be added, anyway.

Another difference between this circus bike and many other bicycles is that it does not have any sort of suspension system whatsoever. Many other bikes, such as mountain bikes, have aggressive, capable suspension systems that help to soften rides over particularly tough terrain. This is not a handicap for this bike; if anything, it increases a rider’s sensitivity of the pavement underneath, but be aware that riding a bike like this over rough roads will be a bumpy experience.

Our Hoppley Circus Bike has 20 inch wheels and it is suitable for riders with a minimum inseam length of 29 inches. It has cotterless hubs with hardened spindles and is 100mm from center bearing to center bearing. The rims of the wheels are 20 inches, 32mm wide and made of steel and feature single-wall construction. The pegs on the front wheels are also steel. It comes with cotterless, steel,125mm crank arms and plastic pedals with 9/16” threads.

It features a round crown mainframe made of steel with 40mm main cap bearing houses. The steel frame adds a bit of weight (the overall bike is 22 pounds) but it is extremely strong and durable - enough to hang tough through the unplanned dismounts of the trial period of learning.

Is It the Same Thing as a Minibike? 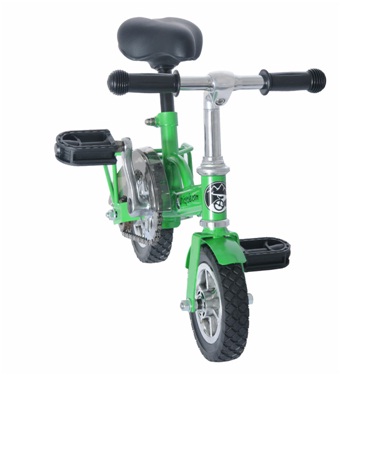 Although you may hear minibikes like our UDC Mini Bike referred to as circus bikes or even clown bikes, no, they are not the same thing. If you have a moment, check out our mini bike and you can see for yourself that they are very different.

Though our circus bike is smaller than many other bicycles, it doesn’t come anywhere near the exaggerated diminution of our minibike, which is specifically scaled down for dramatic effect. However, our mini bike, like our circus bike, is made to the highest standards of quality.

This little bike may be small but it is tough as nails, with a steel frame and non-pneumatic tires that can’t go flat and can shoulder a lot of force. Consider this: our mini bike is significantly smaller than our Hoppley Circus Bike, but it weighs nearly 14 pounds, over half of the weight of the much larger former option, which tips the scales at only 22 pounds.

Because of this, although they are not the same, our mini bike is also an excellent choice for challenging your ridership skills. Try out new tricks on it or simply impress a crown of lookers-on. It’s probably not an ideal commuting vehicle, but it’s tough enough for trick riding and it’s nearly sure to turn a few heads.

What Can You Do with a Circus Bike?

Now that you know a bit more about our circus bike, the question becomes one of whether or not a circus bike like this one is worth the investment. That depends on your goals. For example, avid unicyclists often have more than one unicycle, as no single onewheeler is well adapted to all of the different schools of riding. A mountain unicycle is not necessarily a good choice for touring, and so on and so forth.

So it doesn’t become a matter of “this vs. that,” but rather, what can you do differently with a circus bike that you can’t do with another bicycle. Here are some reasons you might want to add one of these to your collection.

If you’re into trick riding, a circus bike like ours is a worthwhile investment. Because the wheels rotate freely from each other, the bike is well balanced and solidly built, it is an excellent choice for expanding your trick and stunt riding capabilities. It can handle a bit of rough use while you’re learning, and with some practice, you can learn a whole bunch of new tricks.

Simple tricks like balancing on the front or rear wheels, climbing or hopping, riding in reverse or side-saddle riding are commonly performed and relatively straightforward (despite the fact that they require a significant amount of skill). In addition to these, you can learn other more advanced tricks or even devise your own - this bike is ideal for that and in the hands of a skilled rider will captivate a crowd.

Handling a circus bike that lacks a chain drive and a suspension system requires a decent amount of skill and determination. While there are riders that use street bicycles and mountain bikes for climbing, hopping and trial riding, there’s no reason you can’t try the same with a circus bike. If anything, the advanced flexibility of a circus bike might make it even more suitable for trying to conquer an obstacle course or doing some light trail riding.

●Map out a route, get exercise

Because these bikes lack a chain drive, climbing and attaining speed is arguably more challenging. That means you can get a decent workout on a bike like this by mapping out a course and using it for such purposes. They’re not designed to be touring bikes, but a little bit of creativity goes a long way. Plus, mastering the handling may help you sharpen your skills. Plan a route through your neighborhood and tackle it with a circus bike for a break from the usual.

●Become a better cyclist on your other bikes, or on a unicycle.

If you have no better reason to treat yourself to a new set of wheels, consider it simply as nothing more but a new peak to summit. If you’ve never ridden a circus bike before, it will present novel challenges that you can’t fully understand until you experience them. Learning to tackle a new ride can help make you a more proficient, well-rounded rider, whether your ride of choice is a mini bike, a unicycle or a bicycle.

Try out Another Odd Bike

If you’re not familiar with the name “penny-farthing,” you will most likely recognize it from the look. Those bikes that also curiously lack a chain drive and have comically oversized front wheels? Those are penny farthings.

In fact, despite the distinct possibility that the image might be as closely associated with a circus act as the image of a mini bike, the origins of penny farthings are anything but whimsical. They were actually developed as an innovation (and improvement over) the machines that were considered “bikes” at the time. Actually, penny farthings were one of the first machines to which the name “bicycle” was applied.

These bicycles were so designed on purpose with their characteristic features. The larger front wheel, to which the crank arms are attached (much in the manner of a circus bike or most unicycles) enabled a much smoother ride over the road, and also a higher top speed.

Because the wheel was larger, it made riding over rough surfaces much easier; earlier designs with smaller wheels (and that also lacked suspension systems) were known as boneshakers. The larger front wheel of penny-farthing bikes also offered a commensurately larger circumference, enabling a higher top speed.

Today, learning to ride a penny-farthing bike is a great way to get in touch with a piece of history that is still relevant and presents a challenge that is very much alive. In fact, some organizations still purposely host events and races for riders of penny farthings.

Because the size of penny-farthing that a user can ride is limited by the size of the front wheel (and thus, inseam length) we offer penny-farthings in a variety of sizes. Our smallest model is 29 inches - perfect for smaller and younger riders - and we also offer models in incremental sizes topping out at 54 inches.

If you’re looking for a new challenge and have already mastered the unicycle and trick bikes like a circus bike, get in touch with history and feel the wind in your hair the way that rich Victorians did - in the saddle of a penny-farthing bicycle.

Don’t Be Afraid to Ask for Help

Do you still have unanswered questions about the nature, features or construction of our circus bike? Want to learn more about our minibike or our penny farthings? Need some personal recommendations? We are here to help.

You can reach us via the chat feature on our website, but if you’d prefer to get one of our customer service representatives on the phone, please give us a call at 678-494-4962 and we’d be thrilled to help. Don’t be afraid to ask for it - whether you just have a question about a part or need genuine resources to get started riding, we’ll get to work for you.