The name of our website, Unicycle.com, says it all. Well, at least, it tells most of the story. We’re specialists, enthusiasts, experts on the one wheeler, with an experienced team of riders who are as passionate about the sport as you are.

But when it comes to breaking the mold, we dabble a little bit. While we’re your number one source of unicycles, parts, and information, we also have a trick or two up our sleeves.

For example, Unicycle.com is your source for unique unicycle-themed gifts and unicycle apparel. If there’s someone in your life that could use a special gift or a token of appreciation and you’d like to personalize it with a custom unicycle-themed touch, we can make it happen.

But we also provide other unique rides - unicycles aren’t the only attention-grabbing, skill-demanding wheeled-devices on the streets. So-called odd bikes like minibikes, clown bikes, circus bikes, and even the occasionally-encountered Penny Farthing bikes are worthy of your interest, if not your admiration.

Here are a few things you might be able to glean from a noble attempt to get in the saddle and break and tame a wild minibike.

Alright, so maybe you won’t be learning categorically new tricks, but they’ll feel new if you try to execute them from the saddle of a minibike. If you’re already a skilled mountain bike rider or a trick rider who uses a full-sized bike, think of it this way. The only thing about a mini bike that is sized down is, well, the actual, literal size of the bike.

Everything else grows in scope. The strength you’ll need to balance the little bike; the attention to detail you’ll need to maintain as you ride over rough terrain, even if it is considered flatland. The little wheels of a tiny clown bike do not respond to divots and bumps in the road with the same forgiveness as full-sized bikes. The whole frame may be smaller - but the relationship between size and difficulty of mastery is inversely proportional.

Even when you want to tackle some of the most basic skills like a wheelie on flat, even ground, you’ll be challenging yourself and refining your skills as a rider. Progress to more difficult tricks like a nose manual or a bunny hop, and you’ll be taking your ridership to the next level. Bring air tricks into the question and you’ll really be testing yourself.

Of course, when you take on the challenge of learning to ride a mini bike, you’ll be trying your skills no matter what.

Challenge Your Skills as a Rider

Not every rider is interested in the value of trick riding for entertainment - although that is a big draw with a clown bike. Some of them are understandably interested in becoming better riders and more proficient in their respective disciplines.

Since everything about a minibike is scaled back, every aspect of learning to ride is scaled up in difficulty. You’ll have to retrain yourself to pay attention to balance and to be alert for changing conditions on the road or on the trail. The little tires of a minibike can’t roll with the same types of obstacles as larger wheels.

Then, of course, there’s the matter of negotiating the terrain. Even with a chain drive, it can be tough to navigate and manipulate such a little bike, because the rear wheel has so much less circumference than a larger bike’s rear tire. Don’t believe us? Buy one and try it out! It is far from the only way to sharpen your skills as a bike rider, but it sure is a creative one.

If you’re looking for one more reason to scratch your itch for a new minibike, consider this: if you like the spotlight, no one else will be able to steal it while you’re in the saddle of that clown bike. The nature of the beast is to command attention.

Now, we understand there are serious trick riders out there that don’t see clown bikes and tricks performed on them as a joke. It takes a lot of skill and discipline, which we get. However, whether you want to entertain a group of lookers-on for the value of their laughs or for their applause, a clown bike will not fail to arrest attention.

If your purpose is entertainment, you’re not going to fail in your purpose with one of our mini bikes, or even one of our circus bikes. One thing they’re great for is capturing the interest of a crowd!

Endearing Features of Our Minibike

By the way, if you’re looking for quality in a minibike, you don’t need to look too far since you’re in the right place already. Our clown bikes are built to last and boast of some of the following features:

●A comfortable saddle: One of the only things that aren’t overtly miniature about this mini bike is the saddle. Well, it is a smaller saddle, but there’s no reason your comfort should suffer just because you want to learn a new skill. The UDC Cruiser saddle that comes with this mini bike is comfortable and adequate. It’ll keep you cushioned and supported, whether you’re relying on it or performing tricks that keep you off of it. It even comes with a lift handle so it’s easier to carry this little bike around. Let’s face it - you won’t be able to ride it literally everywhere!

●A heavy-gauge steel frame: Here’s another reality you’re going to need to face. Whether you take it upon yourself to learn how to ride a unicycle or are actually just now committing to learning how to ride a bike, that’s going to come with its share of what we call “unplanned dismounts.” It’s a nice way of saying “you’re going to fall a few times.” You fall, and you get back down. Riders are resilient, but bikes can break. Luckily, this little bike is made with a heavy-gauge steel frame that will roll with the punches just as easily as you. The thing weighs almost 14 pounds - it’ll keep on kicking as long as you do.

●Non-pneumatic tires: One more nice thing about this little bike is that it has non-pneumatic tires, which means they aren’t filled with air. These are solid rubber tires that can absorb serious impact and hard riding and keep on dishing it out.

Basically, if you’re in this with serious interest and you need a piece of equipment that can hang with the trials and unplanned dismounts of learning to ride, this mini bike will get you there.

The Draw of a Circus Bike

So maybe you’re into the idea of trick riding or of a bike that doesn’t have a chain drive so you can exert more precise control over the axle. Maybe you aren’t really drawn to the appeal of the minibike but you want something that’s kind of similar and will still challenge you.

That’s where an option like our circus bike comes in. It isn’t tiny, but it will still challenge you in some unique ways, and if your ultimate aim is to be a better rider, you’ll have a hard time finding something better. 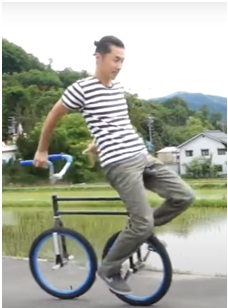 Just like our clown bike, our circus bike can help you cut your teeth on the art of trick riding. However, in this particular case, the challenges you’ll face won’t be exactly the same as they are with the clown bike.

For one thing, our circus bike is a full-size bike. It also features two wheels that rotate completely independently of each other and the rear wheel axle attaches to the crank arms without a chain drive. While this will limit your speed, it will increase your precise control over the rear wheel. This will help with balance when you’re perched on the rear wheel and performing hopping tricks.

However, if you’re a fan of tricks that keep you balanced on the front wheel, it’ll be a lot harder to control; it’ll be all about balance and attention here, and less about control since the cranks are attached to the rear wheel. The size of this type of bike even makes it possible for you to attempt trick riding with a partner!

Since this bike is larger than our clown bike, it gives you the ability to trick ride with a partner. It’s designed for maximum effect to this end and even has pegs attached to the front wheels for a second person to stand on.

The Value of Entertainment

Just like our minibike, this circus bike will provide you with plenty of opportunities to dazzle a crowd. If that’s your objective, you’ll be hard-pressed to outdo it with something else.

A crowd will have a hard time ignoring a skillful rider in the saddle of a circus bike, especially if he or she is gunning to impress them. There are tons of different tricks and skills you can practice with a bike like this - just call us to see what we think!

Even if you don’t ride with a partner, being able to pull off difficult BMX tricks with a circus bike, particularly in the presence of obstacles or on a trail, is quite the feat. It’ll make you a better rider in general, and if you’re a unicyclist, it’ll hone your skills of balance and control on that front as well.

Our clown bike isn’t the only set of wheels at Unicycle.com that is exemplary for the quality of construction. This circus bike is also made to make the grade and boasts of the following valuable features in addition to several others:

●Steel frame: Falling off of a bike is a rite of passage, and it’s hardly something you can avoid if you want to call yourself a seasoned rider. It’s just something that happens to all of us from time to time. You’re tough, and therefore your ride should be at least as tough as you - or dare we say, tougher. This circus bike is made with a steel frame that will get right back up as quickly as you do.

●Steel rims: Aluminum may be light, and it’s pretty strong too - but steel is steel. Whether you need your rims to hold up from incidental contact, from being dropped, or you just need the extra strength when performing hopping tricks, you’ll get that strength in these rims.

●Steel handlebar that does not adjust: Let’s not beat a dead horse. Steel is tough and strong, despite its weight. Now, you might have been thinking that lack of adjustability is not a feature to be desired, but peel back a layer here. Adjustability means there’s more than one piece or part, and that’s just another thing to break. The fewer parts there are, the less opportunity there is for something to break. These handlebars just add to the toughness of this bike’s overall design.

Get in Touch with Us!

Whether you’re looking for something that’s life-sized or scaled-back, we have what you need. Entertain a crowd, learn new tricks or entertain yourself or a crowd - you can accomplish any of all of these with poise with some of our odd bikes.

Plus, don’t miss a chance to check out our Penny Farthing bikes in that same collection - they’re interesting historical designs that are really cool - you can learn more about them in our blog on the history of Penny Farthings.