Since the dawn of time humanity has been fascinated with ways to improve its processes. This is apparent from the designs of the earliest tools devised by man all the way through the most modern technology on the planet. Man is a tool user; enterprising, efficient, and reflective. We refine processes through the use of technological improvements to supplement whatever natural shortcomings we might have.

In the realm of transportation, this is as evident as readily as elsewhere. Our legs are perfectly serviceable, but there are more efficient and faster ways to move people and products across long distances. Originally we walked; then we harnessed horses. For a long time, beasts of burden and the associated carriages and other contraptions were the most technologically advanced modes - and the fastest modes - of travel.

There is speculation that during some time in the 15th century, an inventor named Giovanni Fontana created designs for a human-powered machine utilizing wheels. Surviving accounts suggest it would have had four wheels and would have been powered by a system of ropes and gears. Despite reliable accounts that the machine was designed or sketched on paper, it is specious whether or not a prototype was ever actually constructed.

Interestingly, one of the least auspicious of all events may have been instrumental in spurning humans to devise faster and more efficient methods of transportation. It has been anecdotally suggested that the 1815 eruption of Mt. Tambora in Indonesia may have been a catalyst for the development of better - human-powered - technology for transportation.

The eruption was devastating - locally and globally. The death toll was staggeringly high in the immediate region, and the eruption was so violent that ejecta scattered throughout the atmosphere had a lasting impact on the climate of the Earth for years afterward. Even places far removed from the immediate eruption suffered famine in years subsequent due to the volcanic winter.

Whether or not it can be conclusively stated that this event was causative to the rise of machines that would evolve into the bicycle may be speculative but it has been cited in the past. Catalytic or not, only a few years later an enterprising inventor by the name of Baron Karl von Drais created a wheeled contraption that was designed to facilitate the rapid movement of riders. Convincingly, it has been said that one of Drais’s reasons for setting out to invent such a contraption was a shortage of horsepower. The adverse climatic conditions in the wake of the Mt. Tambora eruption really did do some serious damage to the livestock population of the earth, horses among them. Drais is said to have invented the machine as a response to a lack of horses, to provide people with an alternative mode of transportation. At the very least, he did create such a machine.

Officially titled the Laufsmaschine or Velocipede, it was a far cry from modern bicycles, but it certainly had the bones of the machine. In essence, it was a wooden frame to which was attached two wheels and a saddle. It was also the first steerable device of such nature, unlike possibly earlier human-powered prototypes that did not enable steering. It contained no chain drive or any of the modern conveniences of today’s bicycles and other similarly crank-powered devices. The rider simply sat atop it and pushed it along using the feet. Inefficient by modern standards, it set the groundwork for what was to come.

It was also popular enough to garner a fleet of whimsical nicknames, such as “Dandy Horse,” “Hobby Horse,” and “Draisienne” among others. As you also might be able to imagine, considering the fact that it could only be propelled when the rider had direct contact with the ground, it had some serious drawbacks in its design. It was suitable enough for cruising, and foreseeably for coasting downhill, but it left enough room for revisions that many upgrades were hot on its tail.

The Laufsmaschine or Velocipede remained popular for a respectable length of time, and there are a few names that have laid claim to the laurels of being the first to attach pedals to the design. That being said, the patent went to ‘engineers’ in France Rene Olivier and Pierre Michaux. Though they may have been inspired by the ideas of others, they were the first to officially create a design for the Velocipede that allowed riders to power the machine through the use of pedals.

Apparently, the first of their machines was very like the original Velocipede around which it was designed as a modification. They were constructed with wooden frames connected by a bar and had a saddle over which the rider sat. The front-wheel was steerable; the only real difference was in the fact that their improvement had pedals and cranks attached to the axle of the front wheel.

This machine came to be known popularly as the Boneshaker. If the reasons for this are not apparent, consider the design of the machine as well as the early roads over which they might have been ridden by the average rider.

It was an all-wooden machine assembled with fixed joints without any suspension whatsoever. Even riding over a roughly treated dirt road would have been a trip; riding over cobbled or otherwise paved city streets would have been nightmarish. In other words, every jolt and jostle - all of the energy of riding would be directed through the frame of the machine into the hapless rider. It was, to put it plainly, a boneshaker.

One of the problems of the Velocipede had been solved by it; it might even be said that it enabled the rider to attain higher speeds through the use of the pedals. Even if so, those potentially higher speeds would have made the ride a great deal rougher for the rider. Hence the nickname. At that point, with one improvement made, the stage was set to create a design that would enable riders to reach higher speeds while at the same time incorporating some technology to soften the ride.

The first improvements that were made over the design of the original boneshaker came in the form of material alterations rather than changes to its fundamental design. Some models were made from metal, which, depending on the construction, could actually be made to be lighter and stronger than wood. That would have made it easier for the rider to propel the machine forward with the pedals, but the problem of boneshaking, lamentably, would remain.

That is, until, in part, a new design hit the scene - the one to which the term ‘bicycle’ would first be applied. That design was what became known as the penny farthing, so named because of the design of its wheels. That design took the form of a larger front wheel and a smaller rear wheel. The penny is an English coin that is familiar to most Americans because we have an adaptation of it ourselves. The farthing is a lesser-known coin that has fallen out of circulation in Sterling. It was the equivalent of the value of a quarter of a penny. These two coins had similar relative sizes to the penny farthing bicycle’s design, giving it such a name.

It has also been called a high wheeler or a high wheel bicycle, and the design of this bike had two main advantages for the rider, and both of these directly addressed some of the shortcomings of the boneshaker’s design. Each of them was attributable to the larger wheel at the front to which the pedals were attached. 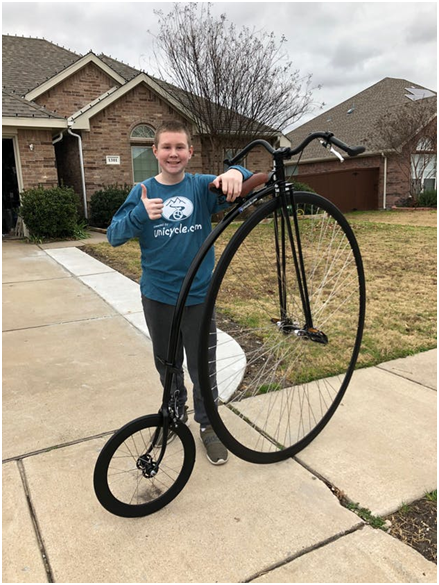 In the first place, the larger circumference of the front wheel enabled riders to attain higher maximum speeds. This is a tenet that is observable in all similarly powered machines that lack a chain drive. Without gears to give a mechanical advantage to the rider, the larger the wheel the faster the speed. A similar rider on two different penny farthings could achieve the highest speed on the one with the largest front wheel size.

The second big advantage that the design of the penny farthing could offer riders was in the fact that they could provide for a greatly improved ride over the boneshaker. In addition to the fact that many of them had solid rubber wheels and strong spokes. The larger front wheel could help to absorb many of the shocks of a rough road. Although penny farthings also lacked any sort of suspension system, holes and bumps on the road could not be felt as easily when transmitted through the extra-large size of the front wheel. In one fell swoop, problems of the limitations of speed and on the uncomfortable ride of the boneshaker had been addressed and mitigated.

It wasn’t all good news for riders, though. Riding uphill as well as controlling the bicycle downhill was very difficult for some riders of penny farthings. In addition, if ever a rider needed to stop very suddenly, he or she would be at risk of being badly injured. Because the rider sat high atop the bike, the center of gravity was commensurately very high. Stopping unexpectedly or suddenly could cause the rider to rotate over the front wheel and land on his or her head, which may have given rise to the expression “to take a header.”

Further improvements were made to the design of the penny farthing with the creation of the “Rover” “safety bicycle,” a design released in 1885 by an innovator named John Kemp Starley. Like earlier models, it contained cranks and pedals, only in this instance, the wheels were similarly sized and the cranks were attached to a chain drive and differential gears that actuated the rear wheel. It is a design that is widely recognizable today. Though modern bicycles contain much more technology and many more features than the rover had, the basic premise of many of those features remains the same.

Today, bicycles are monumentally more complex than the makers of the earliest models could probably have foreseen. Modern models are made with a variety of different materials offering riders a great selection in the way of weight and strength and can have over 30 gears in some instances. They are specialized to tackle a variety of terrain from smooth roads to rough trails and there are models optimized for speed as well as for stunt riding.

While today the modern consumer has many options in modern bicycles, the search for historical models can be an arduous one. That being the case, If you are interested in the history of bicycles from a practical perspective, then you will be pleased to know that here at Unicycle.com you can still find modern penny farthing bicycles for sale.

All of our own modern penny farthings are high specification racing quality models that are made with high strength CrMo frames for durability and longevity. They also feature adjustable rear fork rakes and offer the rider the convenience of a double set of steps. The lower step can assist with mounting, while the second step gives the rider a place to rest his or her feet while coasting.

In addition to our own modern penny farthing bicycles, we offer a Hoppley 29” Penny Farthing that is ideal for kids as well as adults who are looking to learn on a smaller sized model. 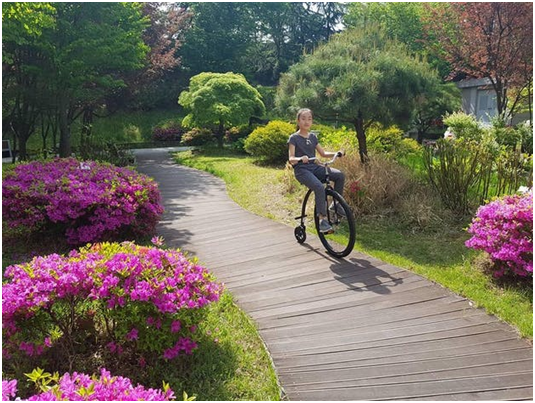 If you have any questions about our modern penny farthing bicycles or about any of our products including our unicycles, please feel free to reach out to us at the number above. You can also reach us on our site via our live chat feature if you have quick questions. Take a look through our collections; we hope you find something that interests you or encourages you to learn a new skill.