Despite the name, we’re good for quite a few different things besides unicycles. We also sell unicycle tools and parts so you can make repairs and adjustments, along with the protective equipment and safety gear you need to ride or learn, safely. (We also sell a wide range of unique unicycle gifts that you should check out while you’re here!)

But in addition to these things, we also sell a number of other wheeled oddities - not just the one-wheeler. Here’s what you can find in our collection of odd bikes.

Some of our most interesting odd bikes are our penny farthings.

Invented in the late 1800s and so called because they had one large and one small wheel, which in juxtaposition look like a penny next to a smaller farthing (a Sterling coin which is no longer in circulation), penny farthings were also the first machines that were widely referred to as bicycles.

Though the design of penny farthings appears whimsical, it is rooted in sound engineering. These odd bikes hail from a time that predates chain drives, and therefore the crank arms were attached directly to the front axle of one of the wheels (the front one, in this case) in order to provide propulsion power.

However, in the absence of a chain drive, the only way to increase the mechanical leverage of the bike and add potential speed was to increase the circumference of the wheel - which made it larger.

Consequently, the rider had to sit higher off of the ground, in order to ride such a larger bike. This made it easier to create a faster bike, as well as one that could handle a slightly rougher road (no doubt a relief to some veterans that had previously experienced a bout with the penny-farthing’s predecessor, a suspension-less contraption known as the “boneshaker,” for reasons you can imagine).

However, the taller bike was not without its trials. The expression “taking a header” refers to the unfortunate occurrence that transpired whenever a rider of a penny-farthing attempted to stop too quickly. The high center of gravity was not conducive to such short stops, and you can, again, imagine the consequence.

Regardless, penny farthing bikes are true gems of history, and there are still some organizations around the world that are committed to riding and racing them. Due to such interest, we sell a variety of penny-farthing bicycles here, including Hoppley 29” and 32” models, as well as Unicycle.com 48”, 50”, 52”, and 54” models. 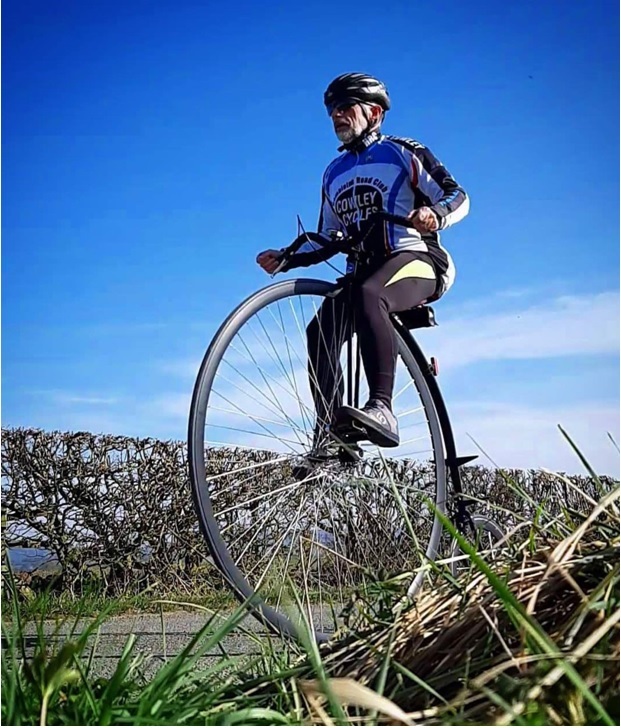 Odd as they are, penny farthings are not the only odd bikes we sell here at Unicycle.com. If you’re looking for something (slightly) more conventional, and which is just a bit less outlandish looking, not to mention great for trick riding, consider our Hoppley 20” circus bike.

This odd bike actually has a feature in common with the penny farthing - it lacks a chain drive. However, in this case, the crank arms are attached directly to the hub axle of the rear wheel, and the tire is not comically large. In this instance, the direct hub-axle interface provides much greater leverage over the revolution of the wheel.

Consequently, these bikes are easier to start, stop, and maneuver, even to balance on one tire - especially in the hands of an experienced rider.

These clown bikes also offer a number of features that make them suitable for trick riding. Both wheels spin independently of each other, and there are pegs on the front wheel that can accommodate a second rider.

Also, this thing is a tough bike. It features a steel frame as well as a steel front handlebar, so even in the event of unplanned dismounts (which you can bet on if you take up trick riding), this thing will get right back up with you.

There's one more odd bike we sell in our collection, our mini bike, and this one is on the opposite end of the spectrum. While it is a totally functional bike that anyone can ride, it is most certainly odd.

It’s a fully-functional bike in a pocket-sized package, at only 17” long and 14” high. But don’t let that fool you, because this mini bike (odd as it may be) has plenty of features that make riding more practical.

For one, it has non-pneumatic tires that can never go flat and which are much tougher, along with a comfortable UDC cruiser saddle with an integral lift handle, because you wouldn’t want to have to ride this thing everywhere to get it around!

Like the clown bike mentioned above, it’s also the real deal and very tough. It’s made with a heavy-gauge steel frame and weighs almost 14 pounds. So, just like the clown bike, in the event of an unplanned dismount, you can pick this thing up, dust it off, and keep on riding. It’s as tough as you are.

Questions About Our Odd Bikes?

Whether you’re looking for an odd bike to try to build new skills or just to practice trick riding, we’re one of the best places you can turn to.