Here is a story that shows the adventure of loving your unicycle.
Benjamin "Sky" Horne of Brevard, NC has pedaled the TransAM Trail in 2010 without the benefit and extra weight of a second wheel. Just the year before he hiked the entire 2,178 miles of the Appalachian Tra 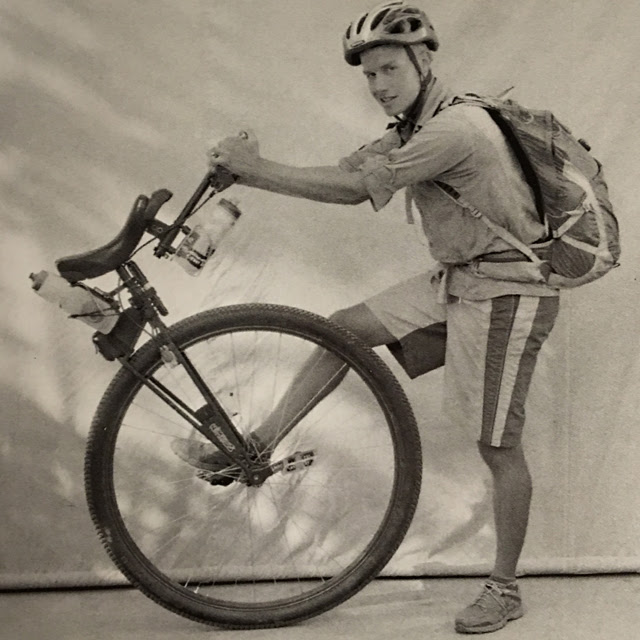 "I hope to dispel the belief that unicyclists are only performers," Sky told us during his trip, which he rode solo and self-supported. "I carry only seven pounds of gear, only what I truly need. There's a strong correlation between the weight one carries in his pack and the weight of his responsibilities."
An example of his strategy for minimizing weight was his tentless sleeping arrangement: a 14oz Montebello thermal sheet, similar to what rock climbers carry for bivouacking, along with a 6oz sleeping bag cover and a 10oz sleeping pad.

Sky's unicycle was a 19lbs Nimbus with a big 36" wheel powder-coated in a color known as Frosted Night. In particularly windy conditions, like those often dished out in Kansas, Sky said he held to a riding position where his body was cocked to the side, "acting like a sail, increasing resistance,but making balancing easier."
In Prineville, Oregon, Sky was interviewed by Lon Austin of the Central Oregonian, "When it rains, my brakes don't really work, and it gets a little slippery on my pedals," he told the reporter."But rain actually feels good. And it's motivating when a downpour starts, because then you really want to get somewhere and get out of the weather.
"Unicycling is a combination of muscle memory and reflexes,"he added."Anyone can learn to ride. It just takes an incredible amount of persistence. You don't really ride a unicycle as much as you control it. When gravity is putting pressure on you [on downhills], then you have to put back pressure on your pedals, which can ruin your knees. Going uphill you just have a positive force against you, which you can kind of fight against. That's much easier than resisting gravity." Sky averaged an impressive 70 miles a day, clicking along at a nearly 14-MPH pace and pushing as high as 20mph for short distances on flat ground.
"For me, the struggle is mental,"he said."I can't coast down hills and take a breather. If I lose focus for even a second, I fall off the back of my unicycle."
Till next month, happy pedaling!
Team Unicycle.com
×