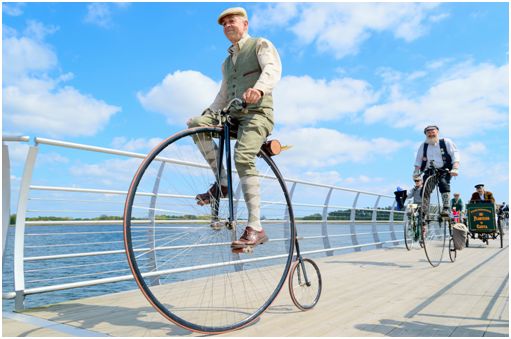 You may have thought from the name that we only sell unicycles here at Unicycle.com, but you might be surprised to learn otherwise. Though your logic would be spot on, we’re proud to offer several other interesting and niche products right here on our site as well, and a great example of these are our modern-day Penny Farthing bikes.

Yes, you can come to Unicycle.com to get your first unicycle or even one of our Nimbus models for serious trick and trials riding to polish your skills. We’re very proud to offer the widest selection of high-quality unicycles for beginners and serious riders alike, but when you are looking for something to give you a real historical thrill, and present new challenges, check out some of our modern-day Penny Farthing bikes.

Penny Farthing bikes are also known as high wheelers or high wheel bikes, and if you are reading this post and are as yet unsure of what a Penny Farthing is, now might be the time when the light bulbs start going off. Think vintage images of riders in waistcoats and top hats or boaters atop those bicycles that look like they may have been designed for show. You’re on the right track.

The thing is, however, that they weren’t designed for show. The Penny Farthing design, which was popular at the end of the 1800s, represents an iteration of engineering in bicycle design and is a relatively early design in human-powered location that took advantage of wheels.

In the early 1800s, a machine that became known as the hobby horse or Draisienne, named after its designer, the Baron von Drais, gave riders the ability to power themselves over ground using their legs. It consisted of two wheels on a frame, required the rider’s legs to touch the ground to provide power, and allowed the rider to steer using the front wheel. Though it superficially resembled a bicycle, it lacked a chain drive and pedals and was really only practical to ride over even, well-maintained ground.

A few years later, toward the middle of the 1800’s a machine that became known as the velocipede was developed and represented a mild improvement over the Draisienne. The velocipede, which comes from Latin words meaning ‘fast foot,’ was also known as the boneshaker for reasons that we will explain shortly. It was close in resemblance to the Draisienne, except that pedals were attached to the axle of the front wheel and enabled the rider to pedal, imparting driving force directly into the wheel’s axle. Although this did not provide the mechanical advantage of chain drives that modern bicycle’s offer, it did enable the rider to take advantage of the circumference to (potentially) multiply speed. As it was made of wood and metal and lacked a suspension system, speed wasn’t the only thing that had the potential to be multiplied. Any vibration arising from the operation of a ‘boneshaker’ as we have previously termed it was imparted into the rider. As you might imagine, riding one of these over rough roads would present a uniquely bone-shaking experience.

With the advent of the velocipede as a marginal improvement over the hobby horse, innovators began looking at ways to provide riders with a smoother, faster ride. That’s where the Penny Farthing bike, on which our modern-day Penny Farthing bikes are modeled, comes into question.

The Penny Farthing bike is just this - a metal frame two to which two wheels are attached, very similar to a modern bicycle, but with some key differences. The first is that the front wheel was large, almost comically larger than the smaller, second wheel at the rear of the assembly. In fact, it is this juxtaposition of these two wheels, the larger and the smaller, from which the name Penny Farthing arose. The two wheels bear a resemblance to the English coins - the penny (which survives) and the farthing (a quarter of a penny, which piece has been removed from circulation) - next to each other. Thus, the name Penny Farthing came to be.

The Penny Farthings, both originals and modern-day Penny Farthing bikes, also steer from the front, like a modern bicycle. In fact, this was the first of these such machines to be termed a bicycle, and the name has been applied to its descendants.

There are, however, some very key differences between the Penny Farthing and modern designs. Penny Farthings, like velocipedes, lacked a drive system, which meant that a rider speed was limited by both how quickly he or she could pedal but by the circumference of the wheel attached to the pedals. In the case of the Penny Farthing, this was the front tire and is the reason for its sizing. 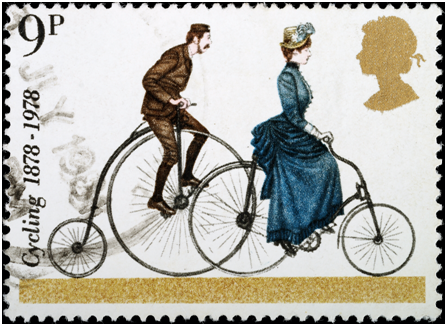 The first advantage offered by Penny Farthing bicycles at which we have hinted was the fact that they offered the rider the ability to increase his speed commensurately with the circumference of the front wheel. A Penny Farthing rider would be able to reach decent speeds on his bike, fairly higher than those of an equally adept rider of a boneshaker or any comparable designs. This made Penny Farthings attractive to urban dwellers who had to get around quickly and wanted to show off their wealth and skills.

The other advantage at which we have hinted was the fact that the larger wheel and frame helped to absorb some of the shocks of riding and of the road. The Penny Farthing, like the velocipede, lacked a suspension system or any mechanism to effectively counter produce the jolts of uneven terrain, but it did have a very large wheel. That large wheel, and the large frame that carried it, did make it a bit easier to diminish some of the shocks of rough riding.

Though its design did present riders with a few advantages over the alternatives of the day, that same design imparted certain risks to riding as well.

Disadvantages of Penny Farthings
There is one distinct disadvantage offered by the design of a Penny Farthing Bike, being that the height of the wheel made it necessary for riders to sit fairly high above the ground. The design of this style of bicycle also meant that the rider wasn’t just high off of the ground, he or she was high about the center of gravity of the apparatus.

This being the case, if a Penny Farthing’s forward progress were to be stopped abruptly, the entire bike and the rider would pivot forward over the front axle. This could result in riders being thrown over onto their heads or forward over the bike. The fact that riders sat high above the ground also gave them a long tumble down over the sides of the bike when such a spill was to occur. In fact, it was in part due to these specific risks that bikes that followed the design of the Penny Farthing and more closely resembled modern bicycles were sold as ‘safety bicycles.’

Why Ride A Modern-Day Penny Farthing?Since a Penny Farthing is by nature a relic of the past, what reasons could you have for learning to ride one? Well, by the token, learning the art of calligraphy is a practice that has been made defunct by modern printing. Developing actual film in photography is a practice, and an art, that has been rendered functionally obsolete, yet people still pursue it with passion.

Those are reasons enough for you to show interest in learning to ride a modern-day Penny Farthing bike. You wouldn’t do so for its superior technology as was once the case. You would do so because it is a hobby, some would even consider it a sport, that requires a unique set of skills.

On the one hand, you’ll be getting back in touch with a real piece of history, which is why some people pursue hobbies in the first place. On the other, you’ll be learning an entirely new skill that will test your sense of balance, your endurance, your strength, and even your mental resolve. Learning to ride a modern-day Penny Farthing will certainly require you to brush up on your athletics and if you master the art of the Penny Farthing you will even be experiencing a new and enjoyable way to get some exercise as well.

To that end, there are still organizations that are devoted to racing Penny Farthings, so if you are expressly interested in athletics and sporting uses, you might even be interested in taking up Penny Farthing racing. Just take a quick look around the web and you’ll find organizations that practice the riding of these and similar antique designs not only for please but for competition.

You’re In the Right Place
If you’re interested in learning to ride a modern-day Penny Farthing, you’re in the right place. As we stated, while we are your premier supplier of the best unicycles out there, you can also find associated gear and Penny Farthing bikes right here.

If you are a seasoned rider and you’re interested in getting a younger one introduced to the sport, take a look at our Hoppley 29” Penny Farthing, which is ideal for kids and even adult beginners. It’s sized perfectly for those who are looking to get into riding a Penny Farthing bike but aren’t going to tackle larger models yet. While it isn’t as readily capable of the speeds of some of our larger models, it also is lower to the ground and will give you the experience on a more approachable level. This model also has a small step built into the back above the rear wheel to help with mounting.

If you are looking for a larger modern-day Penny Farthing bike, take a look at our own 48” MK4 Penny Farthing. This Penny Farthing offers an experience that is similar to early Penny Farthing designs but also has a few user-friendly features built right in to make it easier and more enjoyable to ride. Since there is no drive and the pedals are attached directly to the front wheel, any time you want to coast on a Penny Farthing, you either need to keep pedaling or take your feet off of the pedals. This model has a double step for you to rest your legs while coasting, and this model features an additional step that can be set up to help with mounting. It’s a great option in a Penny Farthing bike for those who want to get a really unique historical experience or even learn to race Penny Farthings. 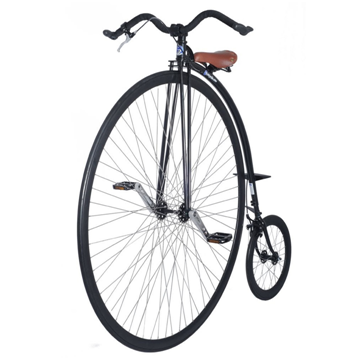 We also offer Penny Farthings in 50, 52 and 54-inch configurations in addition to these outlined, right here on our site. Take a look here at our page of Penny Farthings to find the model that speaks to you. In the event, as the case may be, that you aren’t sure which Penny Farthing speaks to you and you’d like our advice to help you find a model that will fit you properly and provide you with many hours, even years of riding pleasure, don’t be shy to contact us. You can reach us via email at helpdesk@unicycle.com or by phone at 800-864-2925. We’d be glad to offer you some help getting started with the engaging hobby of riding a modern-day Penny Farthing bike.